Puppet shows are not all that hard to learn to do, frankly. The secret is keeping your hands moving so there is the illusion of animation, a living thing. If you hold a puppet limp or stationary for more than a few seconds, it appears to be exactly what it essentially is, a piece of cloth over some kind of foam made to look like a character. But when your hand inside is moving, making the puppet seem like it is looking around and listening to another puppet or your self or the audience, then you have the magic of puppets. The real talent, though, is keeping kid’s attention and making them laugh. When they aren’t laughing, they are still absorbed in whatever conflict you have created that is heading to the next episode or bit or gag designed to have them laughing again. Really it’s about entering children at their level but never playing down to them as if they were babies. With babies (1 & 2’s and 3’s for the most part), this works and is totally appropriate. But kids 4 and older need conflict resolution to keep their attention punctuated by funny stuff and the pay off, a goofy and unexpected final joke. Never scary, but maybe just enough to have them waiting to see what happens, but then a punch line, never a punch (at their senses). Just a little insight into what we kids entertainers do.

Book Where You Want To Have The Party First! 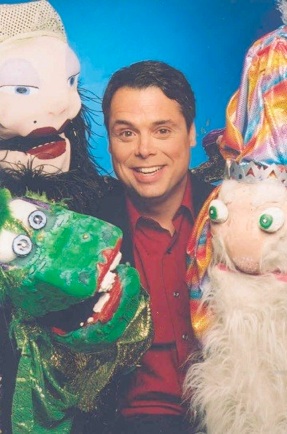